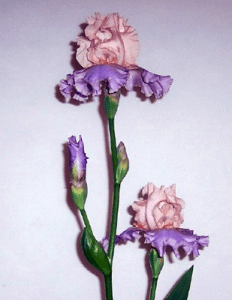 The Garden State Iris Society (GSIS) is a club for New Jersey gardeners, growers, hybridizers and lovers of garden irises.

We are an affiliate of the American Iris Society (AIS) Region 3, which comprises New Jersey, Delaware and Pennsylvania. Our sister organizations are the Delaware Valley Iris Society and the Susquehanna Iris Society.

GSIS holds annual shows in New Jersey and other events jointly with Region 3.

Contact us for more info on Iris events or membership.

Region 19 went through various phases of activity and interest, including hosting national AIS conventions in 1961 and 1966. The 1961 gathering in Newark featured both New Jersey and Staten Island gardens. Of these convention gardens, only Presby Memorial Gardens in Upper Montclair still exists.

The Morgan - Wood Medal for Siberian Iris originated in Region 19. Member Betty Wood, widow of Ira “Sandy” Wood, proposed the medal in the early 1980s (when Dave Silverberg was president). Ira and Betty had hybridized irises together, introducing the Siberian "Ong's Hat." With a generous donation from Betty and matching contribution from our region, the medal was designed, developed and struck. Region 19 RVPs presented it at several AIS conventions before handing over the medal and award to AIS.

In 1993, the Staten Island contingent left Region 19 to rejoin Region 2. 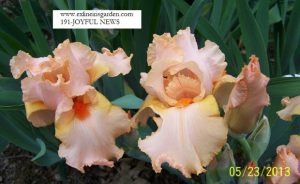 Frank Carr had numerous tall bearded introductions. He was acclaimed for winning international awards and having his iris planted in some famous international gardens.

GSIS members such as Frank Fan, George Hilton and Howard Bushnell all have had introductions. Joe Gatty, Dave Silverberg, and Dick Sparling were active in Region 19 before moving on to other regions and introducing iris. See current hybridizers.

After 64 years in existence, the group's membership was declining. So on Jan. 1, 2011, AIS Region 19/Garden State Iris Society was merged into AIS Region 3.

Over the years, our small, active region featured AIS presidents and notable hybridizers as speakers and as Judges trainers. We also have had some great iris shows, auctions, sales and gala affairs. All will be fondly remembered but never forgotten, now that the Garden State Iris Society has become an affiliate of Region 3.

— Written by the late Stephen Szmuriga, AIS member since 1980